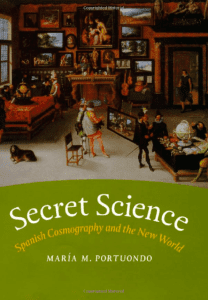 The discovery of the New World raised many questions for early modern scientists: What did these lands contain? Where did they lie in relation to Europe? Who lived there, and what were their inhabitants like? Imperial expansion necessitated changes in the way scientific knowledge was gathered, and Spanish cosmographers in particular were charged with turning their observations of the New World into a body of knowledge that could be used for governing the largest empire the world had ever known.

As María M. Portuondo here shows, this cosmographic knowledge had considerable strategic, defensive, and monetary value that royal scientists were charged with safeguarding from foreign and internal enemies. Cosmography was thus a secret science, but despite the limited dissemination of this body of knowledge, royal cosmographers applied alternative epistemologies and new methodologies that changed the discipline, and, in the process, how Europeans understood the natural world.