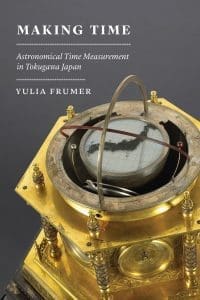 What is time made of? We might balk at such a question, and reply that time is not made of anything—it is an abstract and universal phenomenon. In Making Time, Yulia Frumer upends this assumption, using changes in the conceptualization of time in Japan to show that humans perceive time as constructed and concrete.

In the mid-sixteenth century, when the first mechanical clocks arrived in Japan from Europe, the Japanese found them interesting but useless, because they failed to display time in units that changed their length with the seasons, as was customary in Japan at the time. In 1873, however, the Japanese government adopted the Western equal-hour system as well as Western clocks. Given that Japan carried out this reform during a period of rapid industrial development, it would be easy to assume that time consciousness is inherent to the equal-hour system and a modern lifestyle, but Making Time suggests that punctuality and time-consciousness are equally possible in a society regulated by a variable-hour system, arguing that this reform occurred because the equal-hour system better reflected a new conception of time — as abstract and universal—which had been developed in Japan by a narrow circle of astronomers, who began seeing time differently as a result of their measurement and calculation practices. Over the course of a few short decades this new way of conceptualizing time spread, gradually becoming the only recognized way of treating time.