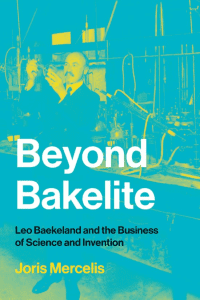 The changing relationships between science and industry in the late nineteenth and early twentieth centuries, illustrated by the career of the “father of plastics.” The Belgian-born American chemist, inventor, and entrepreneur Leo Baekeland (1863–1944) is best known for his invention of the first synthetic plastic—his near-namesake Bakelite—which had applications ranging from electrical insulators to Art Deco jewelry. Toward the end of his career, Baekeland was called the “father of plastics”—given credit for the establishment of a sector to which many other researchers, inventors, and firms inside and outside the United States had also made significant contributions. In Beyond Bakelite, Joris Mercelis examines Baekeland’s career, using it as a lens through which to view the changing relationships between science and industry on both sides of the Atlantic in the late nineteenth and early twentieth centuries. He gives special attention to the intellectual property strategies and scientific entrepreneurship of the period, making clear their relevance to contemporary concerns. Mercelis describes the growth of what he terms the “science-industry nexus” and the developing interdependence of science and industry. After examining Baekeland’s emergence as a pragmatic innovator and leader in scientific circles, Mercelis analyzes Baekeland’s international and domestic IP strategies and his efforts to reform the US patent system; his dual roles as scientist and industrialist; the importance of theoretical knowledge to the science-industry nexus; and the American Bakelite companies’ research and development practices, technically oriented sales approach, and remuneration schemes. Mercelis argues that the expansion and transformation of the science-industry nexus shaped the careers and legacies of Baekeland and many of his contemporaries.