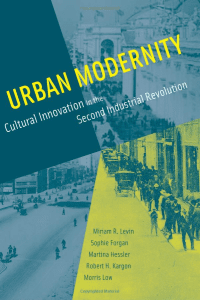 At the close of the 19th century, industrialization and urbanization marked the end of the traditional understanding of society as rooted in agriculture. Urban Modernity examines the construction of an urban-centered, industrial-based culture—an entirely new social reality based on science and technology. The authors show that this invention of modernity was brought about through the efforts of urban elites—businessmen, industrialists, and officials—to establish new science- and technology-related institutions. International expositions, museums, and other such institutions and projects helped stem the economic and social instability fueled by industrialization, projecting the past and the future as part of a steady continuum of scientific and technical progress. The authors examine the dynamic connecting urban planning, museums, educational institutions, and expositions in Paris, London, Chicago, Berlin, and Tokyo from 1870 to 1930. In Third Republic Paris, politicians, administrators, social scientists, architects, and engineers implemented the future city through a series of commissions, agencies, and organizations; in rapidly expanding London, cultures of science and technology were both rooted in and constitutive of urban culture; in Chicago after the Great Fire, Commercial Club members pursued civic ideals through scientific and technological change; in Berlin, industry, scientific institutes, and the popularization of science helped create a modern metropolis; and in Meiji-era Tokyo (Edo), modernization and Westernization went hand in hand.