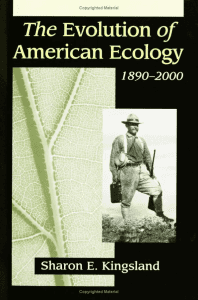 In the 1890s, several initiatives in American botany converged. The creation of new institutions, such as the New York Botanical Garden, coincided with radical reforms in taxonomic practice and the emergence of an experimental program of research on evolutionary problems. Sharon Kingsland explores how these changes gave impetus to the new field of ecology that was defined at exactly this time. She argues that the creation of institutions and research laboratories, coupled with new intellectual directions in science, were crucial to the development of ecology as a discipline in the United States.

By midcentury, American ecologists were leading the rapid development of ecosystem ecology. At the same time, scientists articulated a sharp critique of modern science and society in the postwar context, foreshadowing the environmental critiques of the 1960s. As the ecosystem concept evolved, so too did debates about how human ecology should be incorporated into the biological sciences. Kingsland concludes with an examination of ecology in the modern urban environment, reflecting on how scientists are now being challenged to overcome disciplinary constraints and produce innovative responses to pressing problems.

The Evolution of American Ecology, 1890–2000 offers an innovative study not only of the scientific landscape in turn-of-the-century America, but of current questions in ecological science.